There are plenty of resources that quote what material or name that is associated with a specific wedding anniversary. Have you ever asked why this material or symbol is chosen? 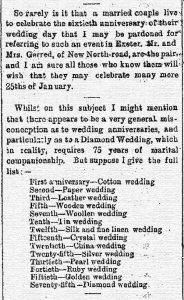 We did and effectively this web site is the result! We continue to research the reasons why a material is associated with any Wedding Anniversary and have published what we have found out to date on the pages below;

Anniversaries have been celebrated effectively since the year after the wedding ceremony was invented; references can be found in records stretching back centuries.Nicholas Nickleby by Charles Dickens cites a celebration for an 8th wedding Anniversary in Chapter 14 (1st published in June 1838) This highlights the fact that not only were the major jubilees celebrated but also the other years. He did not however give the anniversary a name nor symbol.

The earliest reference in printed form we have found to a Wedding Anniversary having a symbol associated with it is from The Morning Chronicle Issue No 17572 published in 1825. Our favourite reference is from The Belfast Newsletters Issue No.11797 originally printed 27th October 1852; and recounts the writer finding a Golden Wedding celebration ongoing whilst he walked the streets of a German town. (reproduced on this page)

The majority of the anniversary lists converge on the major anniversaries i.e. 25th is Silver and 50th is the Golden anniversary on the majority. We suspect the reason for this is that these wedding anniversaries are the ones that have created the tradition (as our research has born out) and thus an alternative material would not have be accepted and thus not be used. Indeed it is the anniversaries between the major ones where the variations happen and also on the later years where, previously, couples did not reach that there is debate over the correct material or symbol.

We’ve been asked why our anniversary lists are different from some other sites on the web?  Well there are numerous reasons; some are just plain wrong maybe by mistakes or because they are trying to promote a specific gift idea based on their industry. Our site uses an aggregate solution to offering gift ideas, where we’ve had more than one reliable source quoting a symbol for the specific year we include it in our listings showing the most popular first.

Having grown from a hobby site, we feel our intentions are to inform and educate first thus we have used what we believe to be the most frequently used symbols.

We continue to be frustrated in not being able to identify where it was decided to use Paper as the first anniversary symbol over the traditional theme of cotton,
we have a couple of theories, one being it was promoted by someone with a vested interest in paper based gifts and the other being it was modified during the
great war (first world war) as cotton was considered a more scarce resource than paper.

Back in 1998 we cross referenced a number of sources and have to agree there is no definitive list for wedding anniversaries although they do all seem to agree on the major anniversaries. Some of our sources are listed below:

The earliest know references are to Silver (25th Wedding Anniversary) and Gold (50th Wedding Anniversary). These appear to originate in Middle Europe (Germanic Region) and involved the spouse giving his wife a silver garland when they had been married for 25 years. Some European countries also celebrate Twelve and a half years of marriage using Copper as the Anniversary Symbol.

We have found references to materials associated with specific years which follow the traditional anniversary lists for the first 5 years of marriage and then every 5th year up to 25th and then 50th and 75th.

The earliest reference we have found other than the Silver or gold is to the 5th anniversary (Wood) which implies this became the material for that anniversary around 1875.

There are currently 2 Diamond Anniversaries, one at 60 and one at 75 years. The 75th anniversary is the original traditional diamond anniversary with the 60th being added when Queen Victoria (English Empire Monarch) celebrated her Diamond Jubilee on her 60th anniversary of accession to the throne in 1897 and this has since been adopted as an appropriate Wedding Anniversary also, at first glance seems logical however Queen Victoria’s Husband died in 1861 21 years after they got married thus linking the 60th Wedding Anniversary to the Diamond Jubilee may have made one not amused!

In 1937 the American National Retail Jeweler Association issued a more comprehensive list which associated a material for each Anniversary year up to the 15th Anniversary and then each fifth year after that up to the 60th Anniversary.

Additional lists are issued from time to time however the one quoted above is more or less the defacto list for the Traditional names of Wedding Anniversaries.

It has been around for a number of years now, which makes its title rather misleading as none of the items listed are particularly modern!

This list provides alternative material suggestions for the years and include “modern” items such as electrical appliances and Fashion Jewellery.

It is hard to quote the originator of the modern anniversary list as a number of lists appear to have been issued and they slowly converged to give the Modern list that is in general use today.

Given the age of the modern list I think it is time to issue a new list which should better reflect the global village that the internet has delivered. Perhaps we should call it the “Internet Wedding Anniversary List”

We are giving this some serious thought and will issue it on our site soon, as an example we thought the 1st year should be a gift from the ends of the earth, to reflect the capability of the internet to connect to everybody on a global basis and that you would go to the ends of the world to make your partner happy.

If you have a suggestion for an Internet age gift then please email us and we may include the best suggestions in the list. Please qualify you list suggestions as to why they should be included. e.g. what relevance they have in the internet age and how they show your love for each other.

This anniversary list was issued by the American Gem Trade association, we have yet to confirm when. It complements the Birthstone list which associates a precious stone against the month when you were born.

This list associates a precious metal or gemstone with wedding anniversaries up to the 25th and then every 5th year up to the 75th. The list converges with the traditional and modern lists on major anniversaries such as 25th (Silver) and 50th (Gold)

We’re not sure who issued this list, the references we have to it do not have a source quoted thus we assume it was issued by a Florist guild or similar.

The earliest reference to this list we have found is in the early 1960’s This list associates flowers with each anniversary year up to the 15th and
then ever 5th year up to the 50th.

A few wedding anniversary lists have included details above the 75th anniversary both on the modern and traditional side.  I suspect
these Anniversaries are extremely rare. However given an increase in life spans these may start to be used more.

If you know of anyone celebrating an anniversary above the 75th Anniversary we would love to know. Please mail us at Anniversary
Ideas Team.

Few couples celebrate more than the 80th anniversary and only 1 couple have achieved a 90 year marriage!

In Australia the longest marriage on record is that of Wesley Arney (Wes) and his wife Vanetta who in 2003 celebrated their 79th anniversary
unfortunately Wes passed away the same year. A brief news story on their marriage is available here.

In Britain the longest marriage on record was a couple from Bradford who celebrated their 87th Wedding Anniversary together in
January 2012 (News story here).

If you know a UK couple celebrating their 80th or greater wedding Anniversary we would love to hear from you.